“Out where yr going”: a review of Pregrets

This book begins with three emphatic repetitions of its title: this unusual word is boldly presented on the simple tasteful cover, and then whisper-small on the first leaf, and then bold again on the title page. But it is also there as the title of the first poem, and it appears again as the title of ten more poems in the book. A neologism that off-handedly encapsulates a whole history of poetics and aesthetics, the word “pregrets” is the first surprise of this fine handful of poems.  Perfectly designed to fit the hand and the mind of any reader engaged with poetry’s current dilemmas over such elements as imagery and personal psychology or even just having fun, Pregrets is a fitting book for our times.

Its poems are thoughtful, even in their tone, as they suggest the hesitations and shifts in voice that thought hazards all the time. Person and personality are not chased out of the poems by any simple objectivity; they are, instead, invited to expose themselves as everyday engines of language making. The words and phrases come in everywhichway, from the kids or the TV, from inside and out, from a feeling of loss always already there in putting things into language, from our habitual forms of addressing things, and from our common concerns. There’s a strategy of fresh composition behind each line that reminds me of what Anselm’s dad used to teach: each line, a new mind. That mind is not our own. The act of “putting it into words” is usually half-begun before you know it; it’s not a matter of expressing feelings but of catching what they say or what they have you say.

The poems use only a few different titles, repeating “Pregrets” and “Regrets” several times each. The first “Regrets” poem reflects on the idea of “pregrets” by saying, “all pres are / broken frames humanly stuck behind / some claims to know time by marks” (11). This poem pushes past pre-formed feelings and perception by using images that seem ostensibly to come from bird-watching, a pastime that operates on the basis of matching what’s seen to forms pre-known. The poem asserts that “that pelican’s an old form flying / by this fish house any pre might be a / plunge breaking down” (11). We are given an image we know (pelican plunge) and asked to read it in terms of its form and what we think we already know about it. It is moves like this that puts these poems right at the crumbling edge of our present aesthetic world, where poetry is trying hard not to reify bourgeois individualism but can hardly escape its engineering. That “Regrets” poem ends with another image: “interrupted by a cormorant head / popping up all my alls are 2D pres / pitched at arcs to undo as if free” (12). The totalizing image repertoire is put in question right in the imagery there.

The next poem, also “Regrets,” offers a mock-nostalgic image that may call to mind the plastic bag on the whirlwind in American Beauty: “flat blue bag of floating / snacks just walks itself away” (13). And the one following that, also “Regrets,” reflects on this process of knowing the world by what we see and how we feel about it. It asks “why we default / to re-entry that often” and asserts that “your experience pictures / you from time to time” (15-16). This challenge to reverse the usual perspective, from imaging your experience to it picturing you, is carried out throughout the book in a variety of moves that test the ways pictures come to mind out of what’s already in it A “pregrets” poem in the middle of the book starts with the almost random phrase “dowery volt cabinet” followed by “untilled / trop” as if  in comment, which moves toward the relatively clear “little pile of bones on shelf in curator’s house” (21). The opening trope is almost naturalized by those objectively visualizable bones, though we aren’t told if they are bird or lizard or dinosaur bones because the poem again shifts perspective. It goes into another reflection on what the mind does as it works: “but maybe it’s the gravity we don’t understand / quite happily devoid of any supporting medium / and other stuff inextricably conjoined to the baggage / of your brain” (21). The next two words shift things slightly again but also comment on that question of the weight of what’s only ever in the mind, all this poetic imagery, by saying: “launch fantasycast” (21).

That poem ends with the name “John,” a one-word homage to Robert Creeley that acknowledges his similar investigation of how words posit things. It appeared back in the Fifties, in his poem “I Know a Man” when the poet wrote:

As I sd to my
friend, because I am
always talking,--John, I
sd, which was not his
name, …

There a car and a need to watch out where we’re going that are also posited in Creeley’s short poem, all from a voice rambling on in talk. We see these “things” because we hear that voice and want to “get the picture.” Their existence there in the poem ex nihilo is an everyday miracle that is bound to “pres” and to a space that has nothing in it but capacity.

Anselm Berrigan’s most delightful book so far ends on this note:

someone
just walked in & took their time’s photograph
I don’t wonder about the miniature objects lining
up in me not so secretly, all illusions currently
in the shop, which is all air, for instance we’re
writing in sentences, nothing has to be having
matter, want to say a few words about lino
engraving refuse to insure the back-up drive
the stand-ins a gang of vicious holograms
in defiance of their own needs and so forth
Matisse was ambivalent about words they said
(41-42)

But Pregrets is not just about any old philosophical subject like the weaknesses of language; it is more about marvellingly demonstrating words’ little miracles. It works to remember that “you may or may not build your images / into a likeness of my picture,” but you do build (25). Pregrets insists by demonstration that “someone’s / gotta come construct a construct in the this / for me, gotta cuff the image plane, one only / controls the scarring & scaffolds so much” (36).
Or, as Mr. Creeley said in the rest of that poem of his:

…, the darkness sur-
rounds us, what

can we do against
it, or else, shall we &
why not, buy a goddamn big car,

drive, he sd, for
christ’s sake, look
out where yr going.”

Out where poetry’s going, the words do the driving, and the voice that comes before the world.

The Rev. Dr. Thomas C. Marshall used to be an alien, but then he was arrested and kicked out of Canada. His poetry-and-slide-shows began at D.G. Wills Books decades ago, and they continue to turn the tension between verbals and visuals toward the "post-aesthetic" today. He will present a new composition this year at Felix Kulpa Gallery, with an homage to The Sun Ra Arkestra at its heart, and he hopes to head up a panel at next year's AWP on post-aesthetic poetry. Here, he dances "Ring Around the Rosie" with his grandchildren 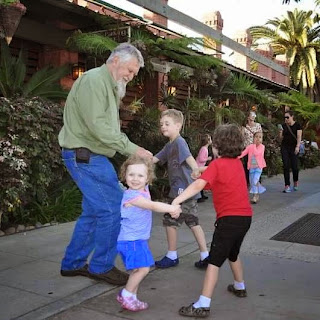 and presents a view of his "altered ego" 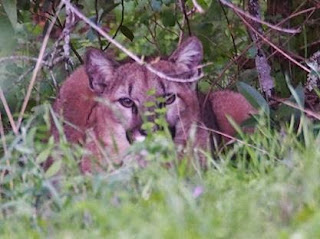